Our ducks are getting huge.  We’ve had them for three weeks already.  I swear they have quadrupled in size. We have gone through I think 5 brooder boxes.  The ducks ruin the boxes after awhile, so they have had to have replacements. Here is the last box we made for them:

Here is my son posing in a weird pose, and Downey checking out the box, so you can get a sense of scale:

We had the ducks in a spare bedroom, and then that got too much. They are slobs, as I’ve said before. We want to get them outside, but the weather is not cooperating yet. Here is what our yard looks like today:

So the ducks are in our shed, which has a cement floor and is on the way outside, anyway. Instead of making them another box, my husband created a duck corral of sorts:

The ducks get really messy – they play with their water and then they stay wet and then they poop, and they stink. So we like to give them a bath (plus they LOVE the bath).  We started in this little tub (which is actually a cat litter pan): 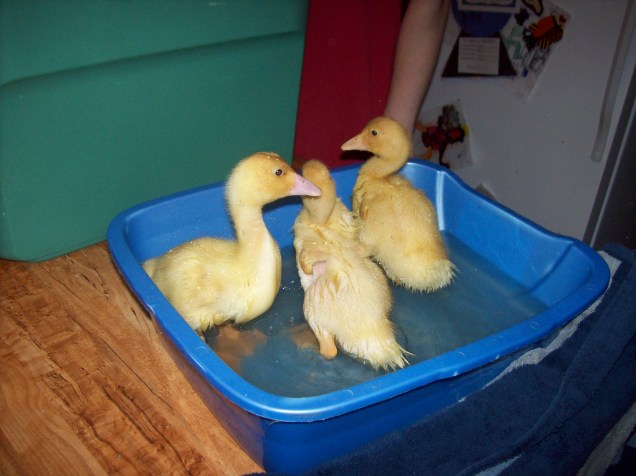 We had a leak in our bathtub so we had to use the pan the first time. We now use our actual bathtub – they all fit in at once, and we have been making the water a little deeper. They will dive under and swim around and splash – they love it.  The last time, instead of trying to dry them just with a towel, I put them on a pile of towels after the bath and then ran a hair dryer over them. They loved that.  I was dealing with a pile of ducks upstairs without a  camera, so unfortunately I don’t have pictures of that.

Today I gave them some pine shavings – we’ve been just using paper towels over the cardboard floor of their corral, and we are changing it every 2 hours or so, it seems.  I thought at the very least, the pine shavings will keep the smell down a little.

We are supposed to have warmer weather this next week – they are calling for temps in the 60s next weekend.  So we will be able to get them outside then. We have an old dog shed, that was actually being converted to a clubhouse for my son.  Our plan is to use that for temporary duck housing until we can get them something built of their own.   We have a heat lamp we can set up if needed for if we get colder temps. The ducks are getting white feathers growing in under their yellow fuzz, so they should be ready to go out soon.  That is the plan as of now – we will have to see what happens on the weekend. Our weather has been so schizophrenic this spring that you never know…

Oh, and we have chicks due to hatch on Tuesday!  So bird-in-the-house season is in full swing.