Our two female rabbits were due to have babies on Memorial day weekend (about May 27th).  We moved the rabbits to their outside cages around May 21st, for the summer.  Marigold, my usually skittish bunny, immediately started pulling fur once she was out there (we gave them both nest boxes when they were moved.).  Petunia didn’t pull any fur at all even when they were due.

Marigold became less skittish while outside, which is really strange – I figure maybe because they don’t see the dogs anymore – their cages inside were in our shed so the dogs would move through there sometimes.  Marigold had a litter of 11 babies on about the 27th of May – quite a lot, and it was her first litter. A couple days passed, and Petunia didn’t have any babies, so I thought maybe the pregnancy didn’t take – that had happened the month before when I attempted to breed them. I wasn’t sure what to do, but just figured I would wait.

On May 30th, Petunia had 6 or 7 babies – we found them and they were either killed by her or stillborn.  We thought maybe she had been spooked by something outside, or something. Later that day, we went out to feed the rabbits and she had died. I’m not sure what was wrong with her, but I read that sometimes they can get a baby stuck and then go septic really fast.  That is possibly what happened.

Marigold has been a decent mother, but we still lost many of her babies. We had a bit of a cold snap over the first few days of June, like in the 40s at night, and here and there we’d find a dead baby bunny – it looks like one would get separated from the group of them and get cold.  I have been making sure they are covered up with fur and all together in a group, but we still lost a lot of them.  We are now down to three babies.  She has been really good at feeding them though, since those three are all growing really well.  So at least we still have the dad, Buddy, and Marigold and her three babies.

Here are the three babies and their mama, Marigold: 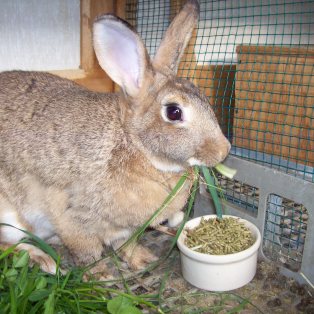 It is a sad tale, but the remaining rabbits are all doing well so it has a somewhat happy ending.

One thought on “A Sad Bunny tale…”