We lost our dear dog Atat earlier this month. I’d like to tell the story of his life with us.

We had our dog Downey when we moved to this house in the U.P., but Downey seemed lonely. We wanted to get him a friend. But I didn’t want a small dog, I wanted a really big dog. We stared searching online, and on Petfinder I saw this puppy:

His name at the time was Landon, and he was 4 months old. He was at a shelter just outside of Duluth Minnesota, and they had him listed as an Akita mix. We did the paperwork and were approved, and drove the 4 hours to Duluth (and 4 hours back) to pick him up.

We brought Downey with us so they could meet and we could make sure they’d get along, and they did. Downey was mostly indifferent, so that was fine. We got in the car, started the drive home, and the new puppy must have been nervous because he suddenly had diarrhea all over the back seat. We had to stop and put him in the very back (I had a station wagon at the time) and you could see Downey was not impressed with his new brother.

We got him home, and the puppy had long lanky legs and was a little awkward (just being young) so my son, who was 5 at the time, said he looked like an AT-AT (those giant machines from Star Wars). So we named him Atat. (Pronounced like At-Tat – both “A”s like in Tattoo.)

At 4 months he was already the size of Downey, so we knew he would get way bigger, and looking at him you can tell he was a Mix of German Shepherd and Akita. (A Shepkita).

He did get bigger, and he was a great dog. He would jump on people sometimes but it was always friendly, and he actually helped pull Downey out of his shell – Downey had been having some anxiety issues when people came over, but since Atat wasn’t scared of them, it helped Downey to calm down with visitors.

He and Downey were great brothers and loved each other. We eventually got their sister Nova, and Atat was obsessed with her. He had a very long torso, and a big curly tail, so he would curl around her, and they’d play on the carpet and on the couch a lot.

After several years we lost Nova, and the two boys were sad for awhile but eventually got into a two-dog routine again.

Last spring, Atat started drinking a lot, and peeing a lot. We brought him to our vet, who could not figure out what was wrong. He was going in the house at night because his bladder was full. We started getting up at 3am to let him out, and then we just added a doggy door so he could go whenever he wanted. That really helped, but still didn’t tell us what was wrong.

I ended up switching vets, and the new vet diagnosed him with Cushings disease. With the pandemic and stuff, we weren’t able to get this diagnosis till December. (I called to make an appointment in July and they couldn’t get us in till late October). We planned to treat his Cushings with Melatonin, because the actual vet medicine for it, something called Trilosane, was way too expensive since Atat was over 100lbs. (Melatonin was recommended by some vets online as a gentler way to treat it, but still effective).

Over the Christmas holidays, I noticed that he was really slowing down – he had been slowly getting slower since he started getting symptoms, but this was a lot. He had been dealing with ongoing swelling in his belly (like fluid) – the vet had told us his first visit in October that she first thought he might have congestive heart failure, but then I thought she had ruled it out – she had done an xray and his heart was not enlarged, but we still didn’t know what the fluid was from.

I got the Melatonin (I had to order a dog-specific version in the right dose) the week before New Years, and I gave him his first dose on a Tuesday. On Wednesday I noticed he perked up a bit, but on Thursday he had Edema (swelling) in one of his legs. Then over the next day or so the other one swelled, and then he was having trouble getting up. We were helping him to stand so he could go outside. He also started panting really hard like he was having trouble breathing.

That Tuesday, January 4th, I went to work and actually called a vet that does euthanasia house calls, to find out pricing, in case. But my husband got home and found Atat outside in the yard, pretty much in the middle of dying. He called me and I came home, but he was gone before I got home. We figure it was congestive heart failure, based on how it happened. So he must have had that and Cushings together.

We are in the middle of winter, with a foot or so of snow on the ground and frozen earth below. So we put him in the garage, thinking in spring we would bury him. My husband and son went yesterday to move him under the snow – we remembered that when we get a warmup in spring, our garage sometimes gets hot so, we didn’t want a bad situation. But they went to move snow and found the ground near our garage, where we were planning on putting him later, was only frozen about an inch or so down, so we laid him to rest in his permanent spot.

Downey has been sad, but getting a little better about everything. We got a kitten last year, and she wasn’t afraid of Atat but she hangs out more than she did when he was here. Our other cat comes out more as well. We will miss him -he was a great dog. I get really upset because he had only just turned 8 years old in December. I feel like he didn’t get long enough, but I guess that happens with all dogs.

We lost our wonderful dog Nova this past Monday. She started coughing in late June, and our vet at first thought it was bronchitis. A week or so later she started coughing blood – they did an x-ray and she had a massive tumor in her lung.  The nearest vets that do any kind of biopsy are way down in Wisconsin, or way down in the Lower Peninsula; the tumor was pressing on her trachea (actually bending it) so we figured the best thing to do was to keep her comfortable for whatever time we had left.  I hoped it would have been longer, but it was only about a month. 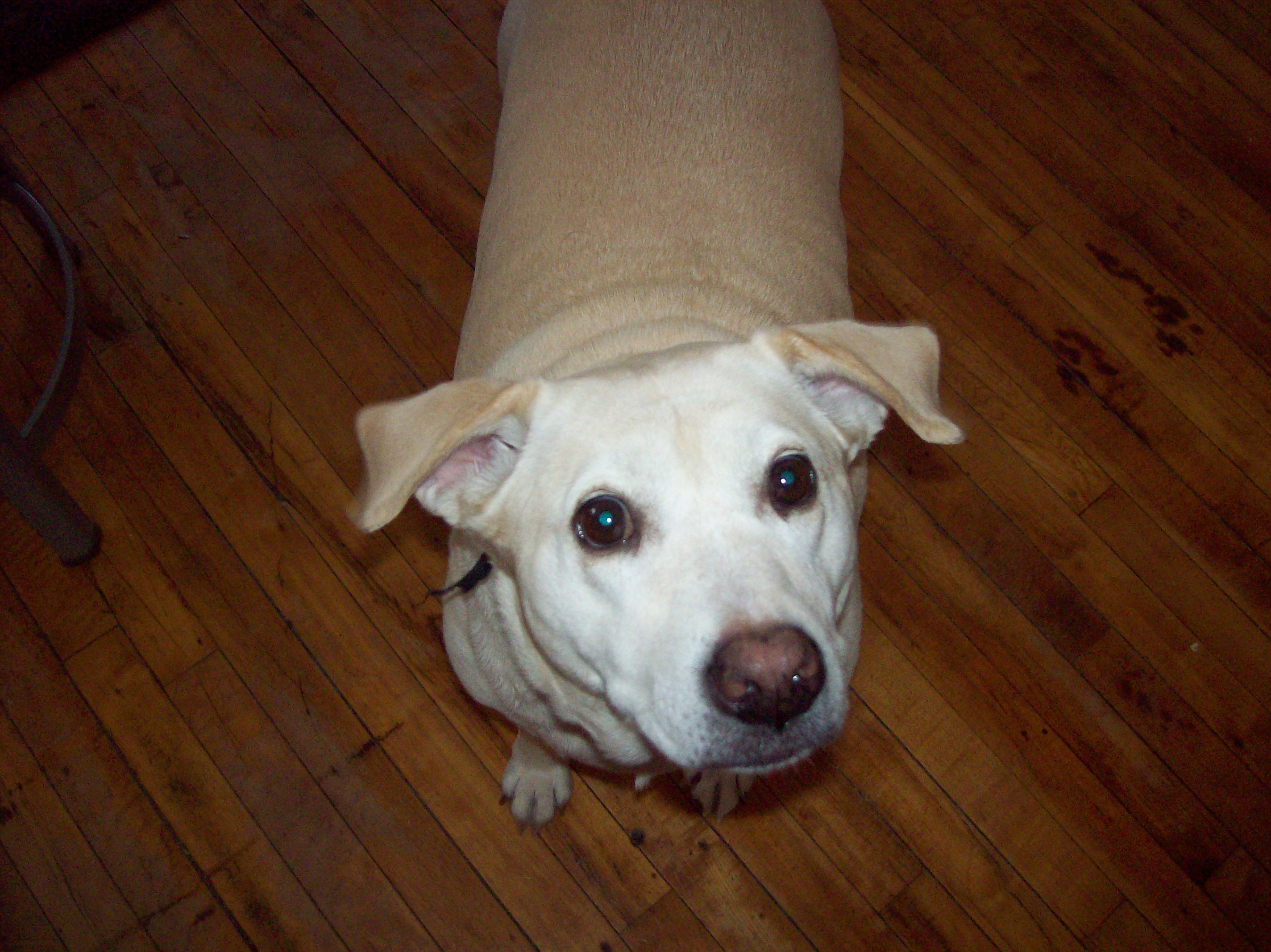 We had her for almost 4 years. Nova was a yellow lab mix. She came to live with us in November of 2015; Her story as we know it starts when she was roughly 2 years old, she was a stray dog down in Georgia, found with a dog that they figured was her daughter.  She was adopted from a shelter by my former coworker’s son, who was in the Air Force down there at the time. She was with him for a couple of years until they moved back up here. Nova lived with my coworker for a little while, since her son could not keep Nova at his new apartment, but she seemed lonely there.  I had two other dogs so my coworker let us take her so she would always have someone around.  She was a very good dog, she loved to eat (too much – we had to buy her a “slow down” bowl).  She loved to eat apples off the ground when they fell off of our tree. She loved cuddling with us on the couch. She loved to play with her dog brothers, Downey and Atat, and she loved to sit in the sunshine.  Her favorite thing was to get petted by people. She didn’t care who it was, or what else they were doing (cutting her nails, etc) as long as she was being petted. 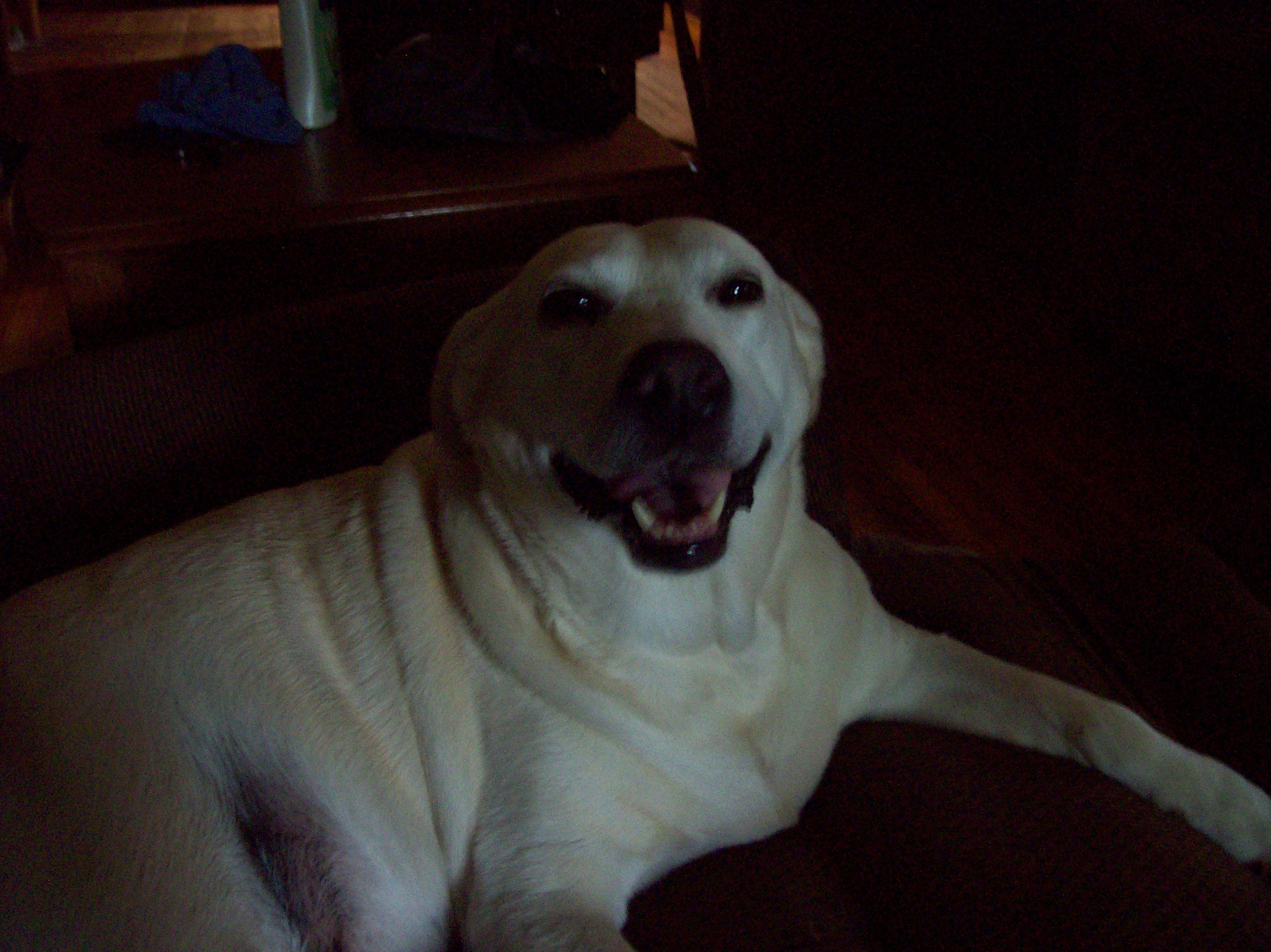 Our hearts are broken but at least she is not hurting anymore.  We will miss our sweet little dog. 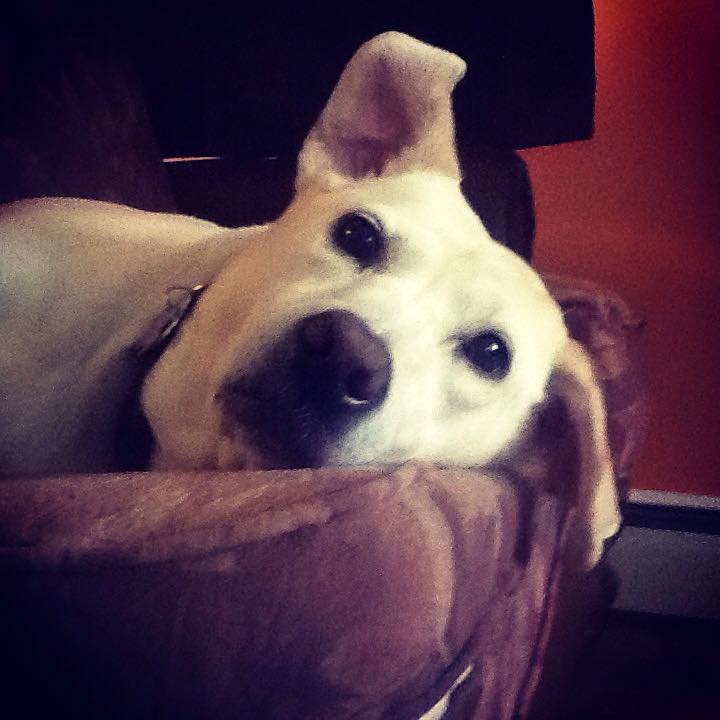